Golden millet is a subspecies of millet. It gets its golden color from its particularly high proportion of beta-carotene. You can read here what else is in the healthy grain and how you can use it.

A special type of small-grain millet is called golden millet. It owes its name to its yellowish colour, which in turn indicates its high beta-carotene content.

Millet is an important part of the world’s food supply and is one of the oldest cultivated grains. Golden millet is a natural variation among millets.

Even if it prefers to grow in warmer areas, golden millet is also cultivated in Europe, for example in Austria. The grain is robust and resistant to pests. Golden millet is often imported from China, India or Canada. In order to avoid unnecessarily long transport routes, you should make sure when buying that the millet comes from Europe.

You can read here which nutrients the grain contains and what you can prepare from it. 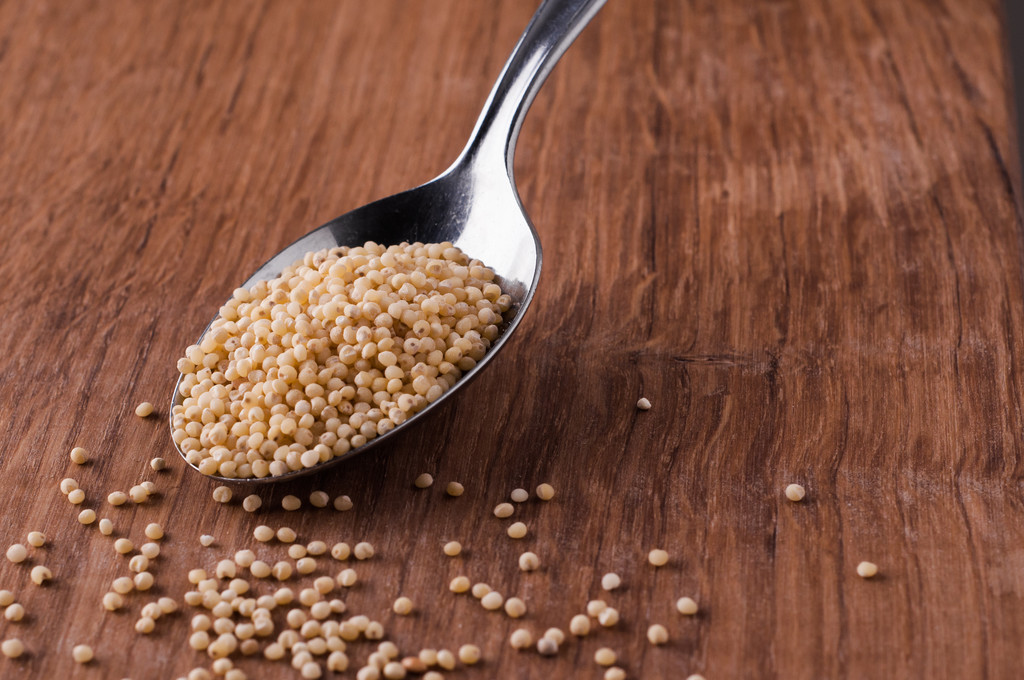 This is what makes golden millet so healthy

You can also benefit from the other nutrients of golden millet per 100 grams:

Carbohydrates: 69 g, of which sugars: 2.20 g
Fat: 3.90 g
Protein: 11 g
Fiber: 3.80 g
The complex carbohydrates and fiber it contains will keep you full for a particularly long time. The high protein content makes millet a valuable vegan source of protein and thus supplies your muscles.

There are about 363 kilocalories in 100 grams of uncooked golden millet. This is roughly comparable to oatmeal. Even if the value may seem high at first glance, millet is definitely suitable for nutrition-conscious people, as the grain keeps you full for a long time, contains hardly any fat and provides you with valuable nutrients.

You should pay attention to this with golden millet

You can get golden millet from organic farming in organic shops or in health food stores. But more and more conventional supermarkets also have the grain in their assortment.

In addition to many healthy ingredients, millet also contains the problematic substance phytic acid. This binds minerals that are no longer available to your body. To avoid this effect, it is best to soak the millet in water overnight before cooking. Change the water before you then boil the golden millet. This is how the substance is released from the grain. According to the consumer advice center, soaking foods with phytic acid overnight can help. If you eat a balanced diet, you don’t have to worry about a nutrient deficiency caused by phytic acid.

Golden millet is dehusked before it is sold. Therefore, it is not a whole grain cereal. However, because the nutrients are distributed throughout the grain, millet is just as nutritious as whole grain products. The millet germ can be damaged when the husks are removed. If this happens, the grain is no longer germinable. In addition, the released germ oil wraps itself around the grain. This oxidizes quickly and can lead to a bitter taste in the grain. To avoid this, wash the golden millet thoroughly with warm water before processing it.

Ideas for recipes with golden millet

Golden millet is an incredibly versatile food that enriches your dishes with its nutty note. You can prepare the grain both savory and sweet.

Just like you cook porridge from oatmeal, you can also prepare a delicious breakfast porridge from millet. Just try our recipe for millet porridge.
If you cook the millet longer, you can then puree it and season it with a little cinnamon and applesauce to make a fruity dessert cream.
You can use golden millet flour to make bread or other pastries. You can replace all or part of the flour with millet. However, the flour behaves a little differently and gives a softer and slightly stickier consistency than wheat flour.
The cooked golden millet is also an ideal basis for fruity fruit salads.

Vanillin: Difference to Vanilla, Production and Worth Knowing

Vanillin is known to many people from baking with vanillin sugar. Here we explain the difference between vanillin and…

Frozen Pizza: Is it Also Available in Sustainable and Climate-Neutral?

Pizza always works. Many of us love to eat them – albeit with a guilty conscience. Because frozen pizza…

Black garlic is touted as the culinary delicacy in some delicatessens. In addition to the unique taste, “Black Garlic”…

Sugarloaf lettuce also provides you with valuable nutrients regionally in winter. In this article you will learn how to…

Defrost Bread: With These Tips, it Tastes Fresh Again

Defrosting bread without it becoming hard right away – not that easy. But with our tricks, the frozen bread…

Cauliflower rice is a tasty, low-carb substitute for rice. We present you a simple and quick recipe for cauliflower…

Rice Flour: Nutritional Values, Uses and How to Make Yourself

Rice flour is a gluten-free type of flour that you can use for cooking and baking. In this article…

Lovage is also called maggi herb because its taste is reminiscent of the spice of the same name. Here…

Grow Porcini Mushrooms in Your Own Garden

Porcini mushrooms are one of the most popular mushrooms on our menu. Year after year, their full aroma attracts…