Hot espresso with cold orange juice: It may sound like a crazy combination, but this mix isn’t that absurd and unknown. The drink has long been on the menu at a Phoenix coffee shop and is very popular. In addition to the taste, it also scores with many as the ultimate pick-me-up.

This rarely seen drink mix was created by the cafe “Nami” in Phoenix (Arizona). The pick-me-up drink has been served there since 2011, but nobody really knows how this combination actually came about.

It’s that easy: Just slowly fill up a glass of cold orange juice with hot espresso. The espresso then settles in such a way that two layers of color are created. Below the orange juice and above the brown espresso – that’s definitely something to be proud of!

When it comes to the taste of the drink, opinions differ. While some describe the taste as interesting and refreshing, critics don’t like the pick-me-up drink at all.

We tried it in the editorial office and in fact, there was nobody who didn’t like it. From “it’s okay” to “I’m sure it’s really good with ice cubes in the summer” to “I’ll make another one” we all had opinions. But does the pick-me-up really give you such an energy boost? Some colleagues felt a tingling sensation in their bodies – but it’s hard to say whether that was just a placebo or a real caffeine kick.

In fact, combining coffee with citrus is nothing new. In Italy, for example, coffee is often served with a slice of lemon or orange to make the coffee less bitter. However, the espresso-orange juice combination has not yet made it onto the drinks menus of German cafés and bars. Maybe soon? 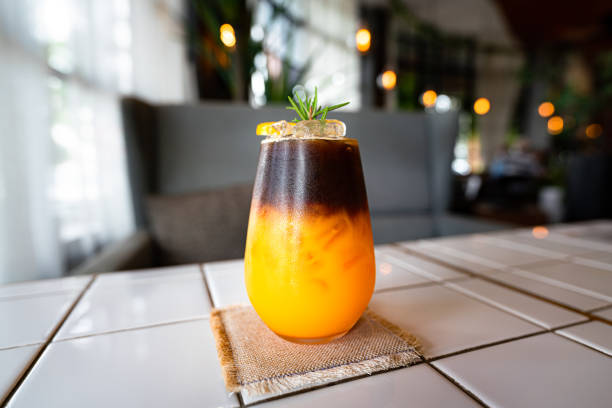 The well-known home remedy “coffee with lemon” is said to not only serve as a stimulant but even help against headaches and mild migraine attacks (1). An unsweetened cup of espresso with half a squeezed lemon is said to relieve pain because the combination prevents the production of an enzyme that plays a role in pain transmission. This is why many painkillers contain a mixture of caffeine and vitamin C.

Cheese Rind: Which Ones Are Edible and Which Are Better Not?

What Does Healthy Eating Mean?

More and more people are dealing with healthy eating for the sake of their health. But what does a…

Turkey roast is an excellent alternative to pork and beef roast. It has fewer calories and is very tender…

The pea soup with salmon rolls is ideal as a starter is inexpensive and quick, and easy to prepare.…

Steamed dumplings, poured over with a fine vanilla sauce or with lukewarm baked fruit, are always a welcome lunch…

The fiery schnitzel pot is ideal as a main meal or as part of the buffet for a party.…

Peppers are very high in vitamin C. This turns the dish into a real Vitamin-c-rich lunch that the whole…