Indian cuisine is expressive that has found fans all over the world. For those who do not know anything about it, it makes sense to try to figure out what is so special about Indian culinary traditions.

In this kitchen, spices set the tone. The taste and appearance of dishes depend on the professionalism of the chef, his ability to choose the right ingredients, and – what is important! – the temperature at which the food is cooked.

As a rule, Indians eat with their hands – more precisely, with the fingers of their right hand. Sometimes, during the meal, “devices” are used – cakes. It is not acceptable to take food with the left hand – it is for washing the body. A collective feast is a rarity: food is a serious and individual matter, according to India.

However, new trends, including in table etiquette, began to actively penetrate Indian life – today in local restaurants, especially in large cities, forks and spoons are increasingly used, although very often the waiters bring a knife only at the request of the client. At lunchtime, inexpensive eateries lure visitors with “set meals”. In the Indian sense, this process looks something like this: quickly and quickly serve a round tray, in the center of which rises a pile of rice, around – everything else. Rice for an Indian is perhaps the most important component of food.

Curry is the Head of Everything 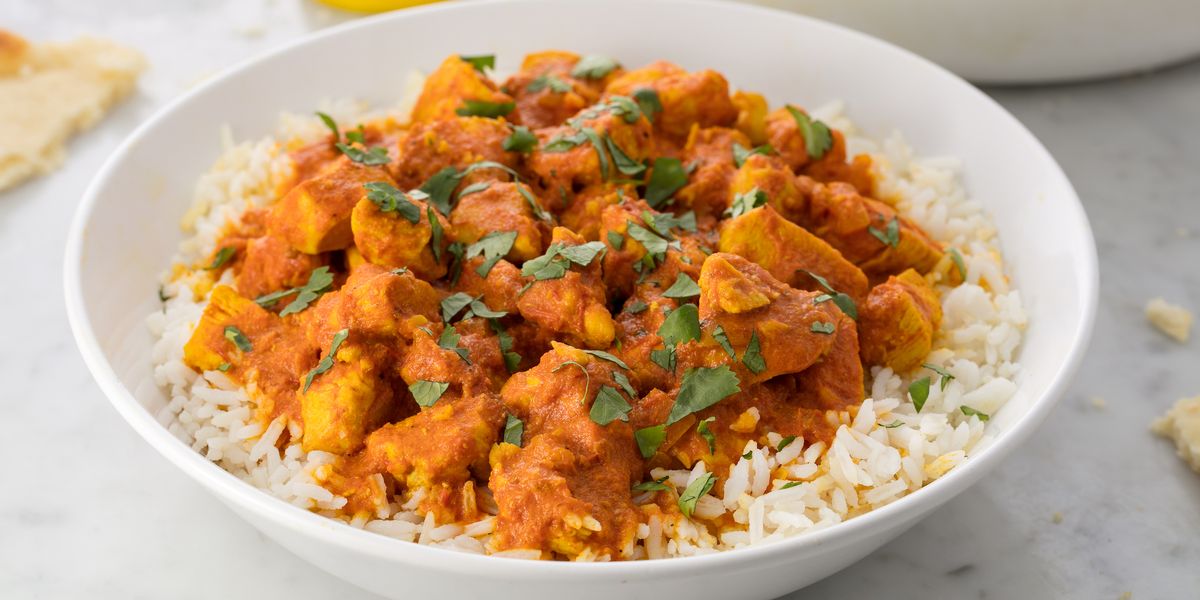 In Indian cuisine, freshly prepared herbs and spices play an important role, and there are more than two hundred of them at the disposal of chefs. They give well-known products an unusual taste, color, and aroma. For a European who is not very familiar with traditional Indian food, it is sometimes difficult to grasp all these subtleties.

Indians try to cure various ailments with spices. For example, a mixture of pepper, ginger, and turmeric, which is fried in oil, is trying to treat colds. They say it helps. The technique of roasting spices is different: before seasoning this or that dish, they grind various ingredients into powder or put them whole, sometimes they do both at the same time. When the cook sees that the spices have reached the desired condition, he is poured along with the oil into the food being cooked. Some Indian chefs do not use oil at all – they fry directly in a dry frying pan – according to them, this is tastier, since the oil does not clog the natural taste of the product.

One of the most favorite Indian dishes is Rice and Curry. It comes in countless varieties: white, brown or red, thick, thin or dry, spicy or tender, with chicken or fish, meat, eggs, or vegetables. Several types of curries are necessarily served with each meal in small bowls (spicy thick liquid dishes, not to be confused with a mixture of seasonings, which is also called that). Sometimes it is served on a tortilla – chapatis, certainly with a monstrously spicy sauce (a natural precaution against gastrointestinal infections). Today curry is a food that has gone from a national league to an international one, spreading all over the world. Outside of India, curry on flatbread is rarely served, more and more in cardboard or plastic boxes with disposable forks.

The curry mixture contains several main ingredients: boiled and dried turmeric root powder, coriander seeds and hot chili and cayenne pepper powder, and fenugreek seeds. Sometimes they also add ajgon (or Indian cumin), black pepper, garlic, ginger, Indian saffron, asafoetida, cloves, cardamom, cinnamon, and nutmeg. Previously, mixes were made just before food was prepared, but now you can buy them in the store. This mixture of curry has given its name to many dishes – meat, vegetable, and fish.

In different regions of India, culinary traditions can vary greatly. 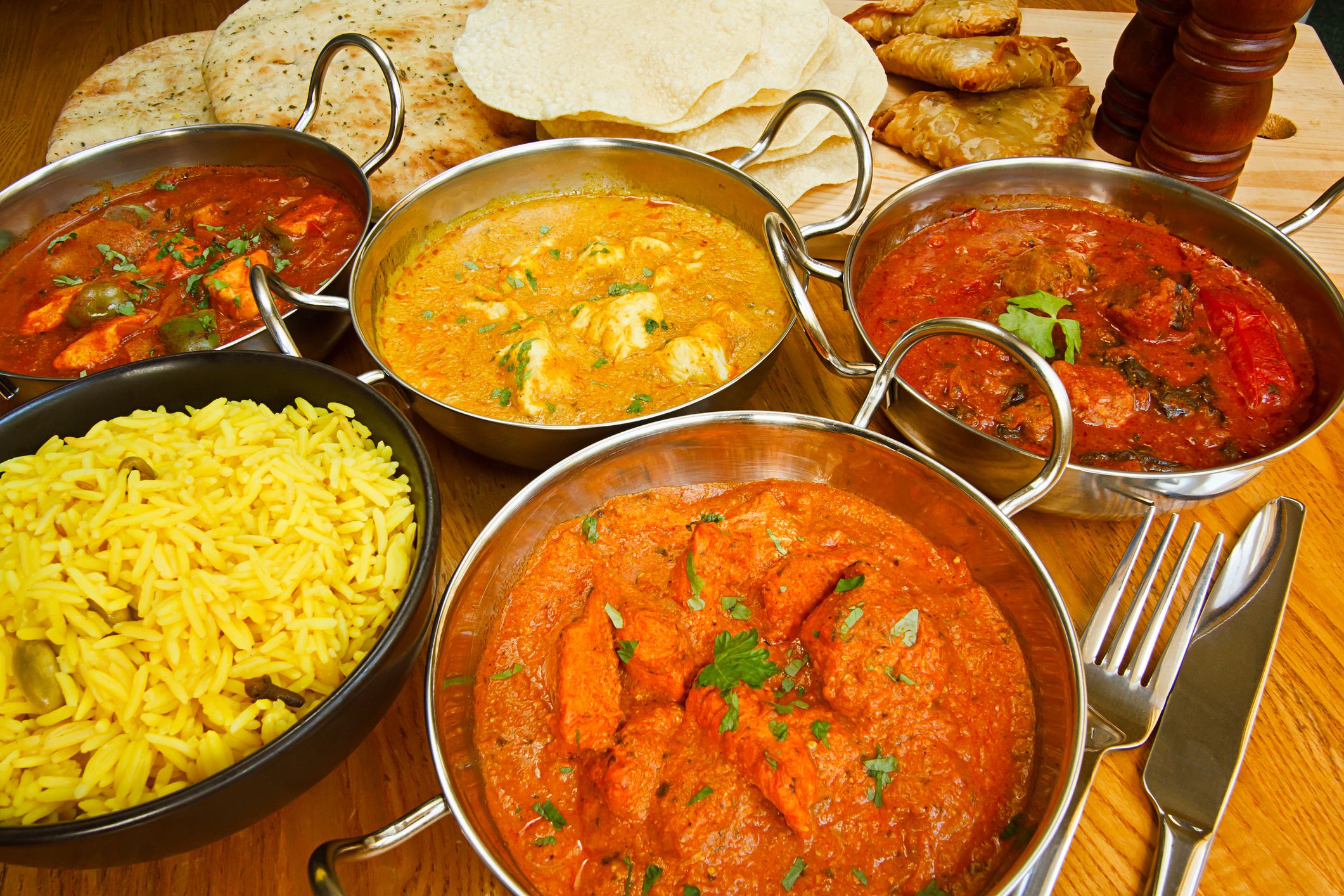 In Ayurveda, in one of the four Vedas, great attention is paid to nutrition. The principles of food consumption have been developed meticulously – depending on the constitution of a person and his psychophysiological state, on the season of the year, locality, etc.

In the north of India, Muslim influence is very strong – as a rule, the Islamic culinary style is more widespread, in which the emphasis is on various types of grains and meats. They eat more lamb and buffalo meat. The cuisine of this region is well-fed and spicy, but in sharpness, it is much inferior to the cuisine of the south.

In the mountainous northeastern regions of the country, the menu is less diverse – to some extent, it reflects the character of the harsh nature. Vegetables grow best in carrots, cabbage, and onions. Barley also ripens well here, from which the famous chang is brewed – a low-alcohol drink that is a distant relative of beer.

The inhabitants of northern India bake nan – bread cakes from grain. Without them, the meal is considered incomplete. Cakes are baked in a special clay oven, somewhat reminiscent of a huge jug – in tandoor. Meat, poultry, and fish are cooked in it. In tandoor – on a spit – a lamb leg can be baked. Without all sorts of spices, of course, and in this case is not complete. Before baking, the lamb is marinated in nutmeg vinegar with the addition of ginger and garlic paste, chili pepper, and vegetable oil. Before putting it into the oven, be sure to grease the meat with yogurt mixed with herbs and spices. Lamb is also cooked in chunks – often in mustard oil, adding turnips, spinach, onions, and dill.

The author of these lines liked the kyufta in tomato sauce – meatballs, very similar to our meatballs. This dish can be found in many countries of the Middle East and South Asia, but it tastes different everywhere. And the “fault” is precisely the spices. The Indian gestaba, a large meat ball soaked in hot and aromatic juice, also left a good impression.

Bengali cuisine is more varied. This is not surprising: West Bengal is the only Indian state stretching from the Himalayas to the ocean, and it also captures the fertile valleys of the sacred Ganges. Bengali chefs are renowned for their fish and crab curries and vegetarian daal puree soup. A typical spice in Bengali cuisine is calvanji, onion seeds.

There is a fairly large coastal zone in the west of India, so fish and seafood dishes are preferred here. The visiting culinary card of this region can be safely called the dishes called “Indian salmon” and “Bombay duck”, which turns out to be not a duck at all, but a fish. It is cooked either as a curry or deep-fried.

In the south of India, meat is practically not eaten – in states such as Karnataka, Tamil Nadu, Kerala, meat dishes are unpopular. Mainly they eat seafood, fish, rice, and vegetables. Every morning from the fishing villages scattered along the coast, boats leave for tuna, sardines, barracudas, sharks, shells, shrimps, cuttlefish, and lobster. Southerners, not stingy, season all their dishes with hot chili, so you can often see yogurt on the table – it is believed that it neutralizes pepper heat in the mouth well.

Indian cuisine cannot be imagined without rice. It must be served with races, pickles and papads. Rasam is an infusion of pepper on tomato, lemon and other vegetables and fruits. Pickles is a salad of lemon and mango slices marinated with hot pepper. Frankly speaking, the substance is very peculiar, you need to get used to it. Papad – unleavened cakes made from rice flour, it is customary to eat spicy food with them.

In Punjab, preference is still given to meat food. Anduri-chiken, a chicken stuffed with chili pepper, is very popular. It is fried in tandoor. Many dishes are made from chickens: for example, paoru-chiken – chicken baked in dough, tiku-chiken – fried pieces of chicken meat marinated in spices. 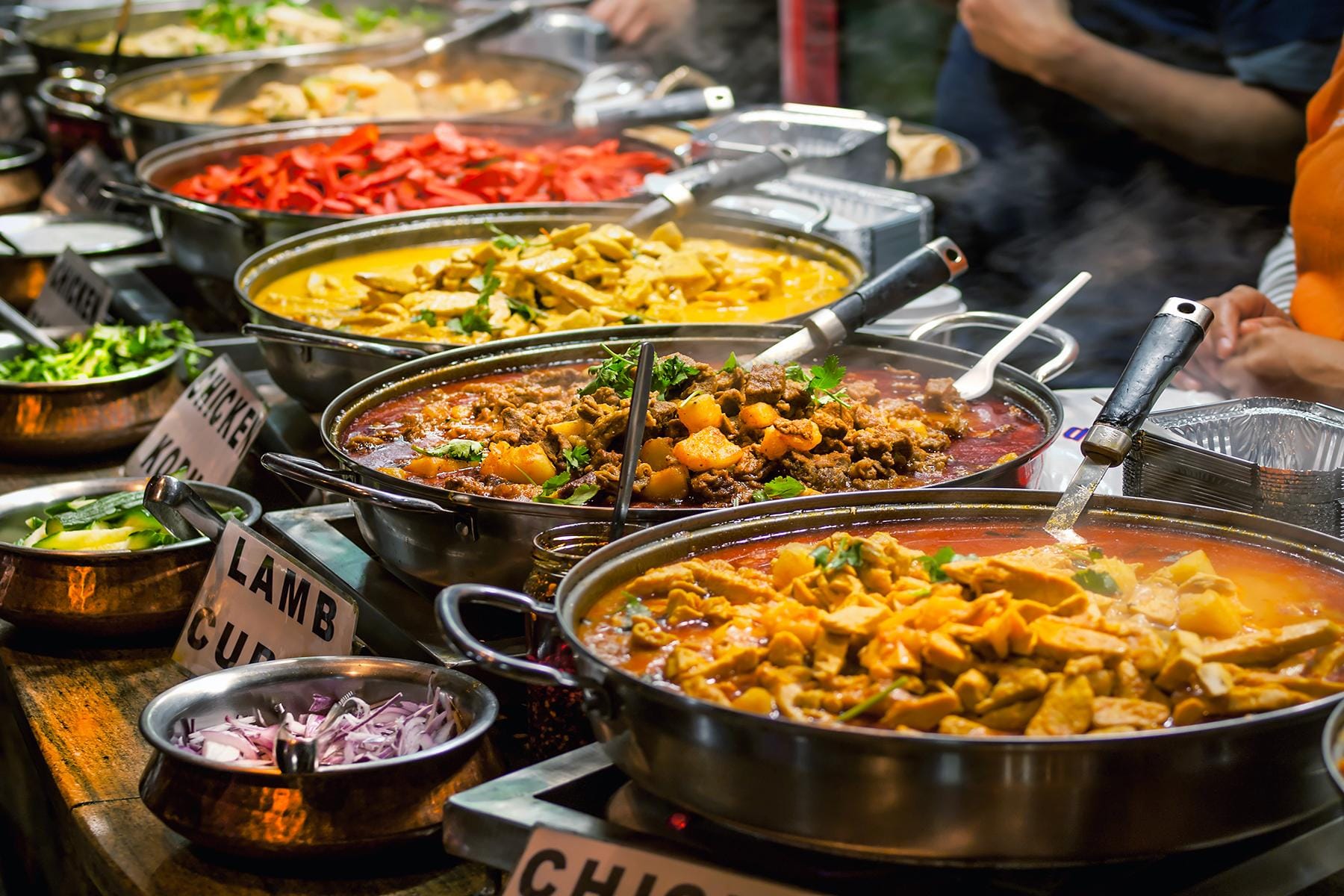 Usually, the Hindus quench their thirst with lime juice, a drink made from tamarind and caraway seeds and, of course, tea – they usually drink it with milk and sugar, as well as with spices. By the way, there is an interesting story connected with tea in India.

It happened not so long ago – in 1971, when the Indo-Pakistani conflict broke out. Then the Indian army occupied East Pakistan (now Bangladesh). Soldiers and officers were so accustomed to drinking tea with milk at home that they could not deny themselves this pleasure during a military campaign. But the problem was that the milk had to be transported from India. While it was getting to its destination in tank trucks, it managed to turn sour. The soldiers did not want to delve into the essence of the problem, so bad gossip began, which greatly alarmed the government.

The exit was found unexpectedly. A certain merchant Gurbash Singh took up the supply of milk to the army. For some reason, it didn’t turn sour. The enterprising businessman then made a good fortune. He told his secret only a few years later, when he was no longer afraid of competitors. It turns out that he threw frogs into milk tanks. By the way, this method of preserving the product is familiar for a long time and in Russia. With the funds received on credit, the successful entrepreneur bought several dozen milk tanks, into each of which he shoved a dozen live frogs. Nobody began to go into the details of why this merchant’s milk does not turn sour, so he got a monopoly on the supply of the product to the army, very quickly becoming the “milk king” of the whole country.

It is not customary to regale guests in an Indian house with strong alcoholic drinks. They are often treated to palm wine – toddy. It has been made in India for a long time. They also drive the national schnapps out of Toddy – Arrak. However, most of the locals prefer to drink soft drinks, which, like tea, quench their thirst well. For example, lassi is a refreshing yoghurt drink that Hindus sometimes mix with a little mineral water. This drink is a kind of “fire extinguisher” that quenches the heat in the mouth.

Food in India is more than food: it has to do with the soul, mind, and body. According to the Indians, properly selected and prepared, it can become the best medicine not only for the body, but also for the soul, and improperly prepared it can be poison.

The complexity of the story about the culinary traditions that exist in India lies in the fact that in this country there is still a very confusing system of caste status replete with corrosive trifles. She meticulously defines the rules: who can eat with whom, and who can’t eat with whom; who has the right to cook food and who does not; from whose hands it is allowed to take food; what utensils to use … But this is a completely different story, which we will definitely tell you about. Of course, when it comes to Indian cuisine, one cannot fail to mention that very many residents of the country do not eat meat at all – they are vegetarians. However, it makes sense to talk about this separately.