Pasta that has almost no calories? Yes, there really should be. We are talking about so-called konjac noodles. These are extremely low in carbohydrates and calories. EAT SMARTER will tell you whether it’s worth trying the low-carb noodles from Asia!

A low-carbohydrate diet, also known as low carb, is all the rage. Bread, rice, or pasta are removed from the menu. For many “forbidden” foods, however, there are now low-carb alternatives, such as protein bread. Now fans of this diet have discovered an extremely low-carbohydrate type of pasta for themselves: the konjac noodle.

What are konjac noodles? 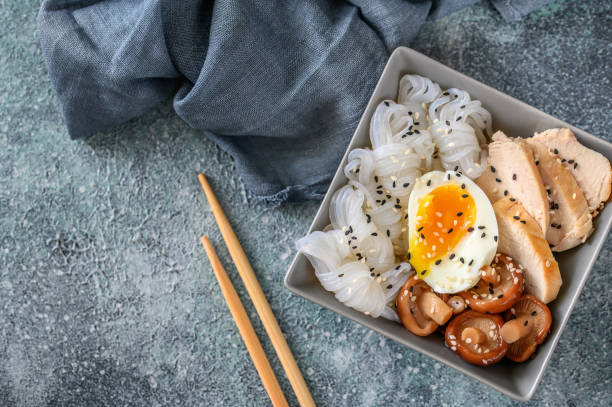 Konjac noodles are made from water, calcium hydroxide (a harmless stabilizer), and konjac root flour. This plant has been cultivated and consumed in Asia for centuries. The low-carb pasta is also known there as “shirataki noodles”. They resemble glass noodles in color and consistency: they are also transparent and slightly gel-like. Since konjac noodles are not made from grain, they are also suitable for a gluten-free diet.

The pasta alternative is popular mainly because of its ingredients: Konjac noodles contain only around 10 kcal per 100 grams. In addition, they are free of fat and the only carbohydrates that are in the low-carb pasta are valuable dietary fibers, the so-called glucomannan. These are said to have many health-promoting effects, but only a few of them have been scientifically proven. It is well established that glucomannan improves blood lipid levels (by lowering “bad” LDL cholesterol and triglyceride levels) and can help with weight loss (1). So far, these effects only apply to Konjac powder. It is still unclear whether these also apply to the pasta.

How to use konjac noodles?

Konjac noodles are prepared very quickly because they are sold pre-cooked. Very important: Rinse the noodles thoroughly under running water before putting them in the saucepan. Otherwise, the pasta could have a slightly fishy smell (but not taste). Then konjac noodles should be heated in boiling salted water for about two minutes.

Since konjac noodles have no taste of their own, it is advisable to refine them with sauces, herbs, and spices. The pasta absorbs the foreign aroma very easily. Therefore, the following applies: Always let the pasta soak in the sauce for two to three minutes before you eat it.

The noodles are also good as a soup ingredient or for Asian noodle pans.

But not only low-carb fans have discovered konjac noodles for themselves, but also many people who want to lose weight. The low-calorie yet filling pasta is a convenient food when looking to shed those extra pounds. However, if you are not on a diet, you should make sure that you eat energy- and nutrient-rich side dishes with the very low-calorie pasta. Otherwise, there is a risk of malnutrition.

Where can you find konjac noodles? 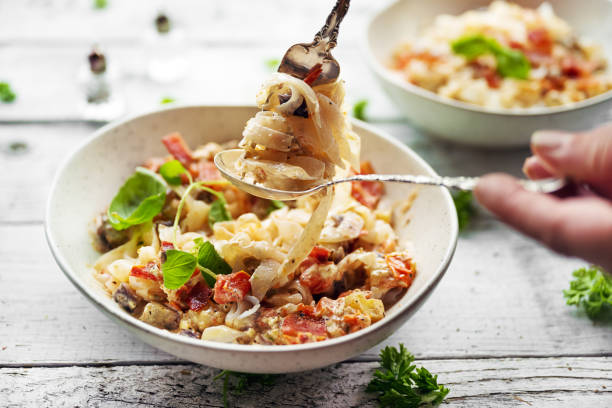 Konjac noodles are mainly available in Asian shops. Recently, however, many manufacturers (e.g. Slendier or Kajnok) have also been offering their products in well-stocked supermarkets – but at steep prices. Of course, fine noodles can also be ordered online, such as the ATG Konjak Noodles Shirataki “Thin Noodles” made from konjac flour.