Nigeria is considered a country where you can not only relax and unwind but also taste unusual, very tasty dishes.

What is the Cuisine of Nigeria?

Nigerian cuisine, however, like West African cuisine in general, is known for its richness and enormous variety. Typical foods include beef, poultry, fish, vegetables, rice, and potatoes. The country’s cuisine uses many different herbs, spices, and seasonings.

Dishes of local cuisine The main dish of local cuisine is considered to be a side dish. He plays the main role. As a side dish, usually boiled rice or yams, fried with vegetables, or two varieties of potatoes (a little sweet and sweet) are served. Richly seasoned fish or meat dishes are served on a separate plate.

Moya-moya is a traditional Nigerian dish. This is a ripe bean casserole with egg and smoked fish, baked in palm leaves. 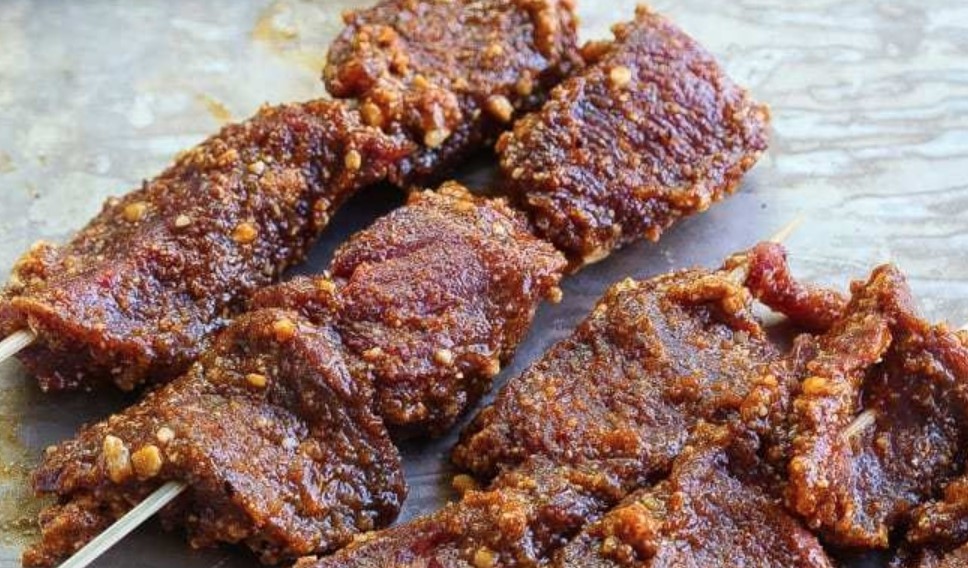 Suya – Very thin strips of beef that are well sautéed over an open fire with nut butter and sprinkled with cayenne pepper. Fresh Nigerian pineapple and fried bananas are also worth trying. They taste different from those that are familiar to us.

Local residents do not eat salty food and fruits. Nigeria’s cuisine is quite high in calories, however, this should not prevent travelers from enjoying its great taste.

The cuisine of Nigeria is the national cuisine of the state of Nigeria, located in West Africa. Nigerian cuisine is very similar to other West African cuisines. It consists of dishes or foods from the hundreds of ethnic groups that inhabit Nigeria.

There are a lot of dishes in Nigerian cuisine based on rice, beans, yams, and cassava.

Meat in Nigeria is used in the preparation of most dishes.

Wara is a soft country cheese made from cow’s milk.

Today, Nigerian cuisine, like most West African cuisines, uses many spices, herbs, combined with different types of oils to create deep-flavored sauces and soups, which are often spiced with chili peppers.

Alkubus is steamed bread made with wheat, flour, yeast, and water. Served with Miyan Taushe. Typical of the Hausa and Fulani Nigerian peoples.

Miyan Kuka is a thick Nigerian soup made with crushed baobab leaves and dried okra. Very common in Hausa cuisine. 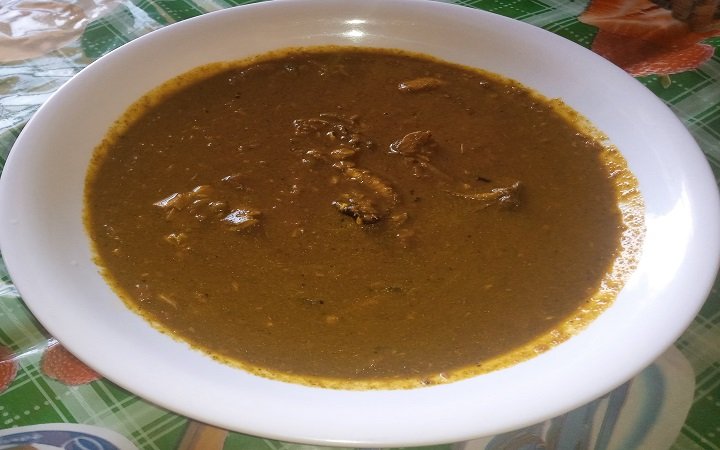 Gbegiri is a thick bean soup popular in northwestern Nigeria.

Okro soup is a thick soup made from okra, spinach, crayfish or shrimp, meat, and pumpkin seeds. Served hot with ugali or fufu.

Egusi soup is a popular leafy vegetable soup thickened with ground pumpkin seeds (egusi), which is popular in Nigerian cuisine.

Banga soup is a popular palm nut soup in southern and mid-western Nigeria.

Edikaikong is a nutritious vegetable soup typical of the Ibibio and Efik people of southeastern Nigeria. It is prepared from beef, game, dried fish, crayfish, beef offal, pumpkin leaves, onions, palm oil. Because the soup contains expensive ingredients, it is considered a delicacy and is served on special occasions or to wealthy families in Nigeria.

Afang is another nutritious vegetable soup that originated among the Efik, Ibibio, and Ananng peoples of southeastern Nigeria. It is served at home and also sometimes at ceremonies such as weddings, funerals, festivals.

Pepper soup is light meat and fish soup with herbs and spices. This is one of the few soups in Nigerian cuisine that can be eaten on its own, rather than as a sauce for fufu or crushed yam. Pepper soup is often an appetizer at formal events and is also consumed in the evening at pubs and social gatherings.

Omi ukpoka is a corn soup made from chopped dry corn mixed with smoked fish.

Draw soup is the name for thick, viscous soups from southeastern and southwestern Nigeria. They are boiled with okra, ogono seeds, and jute leaves. This soup is usually eaten by dipping pieces of fufu into it.

Fufu is a thick, dense porridge made from cassava and green plantains. It is the basis of many African cuisines, including Nigerian cuisine.

Jollof rice is a traditional African rice dish with tomatoes and peppers. 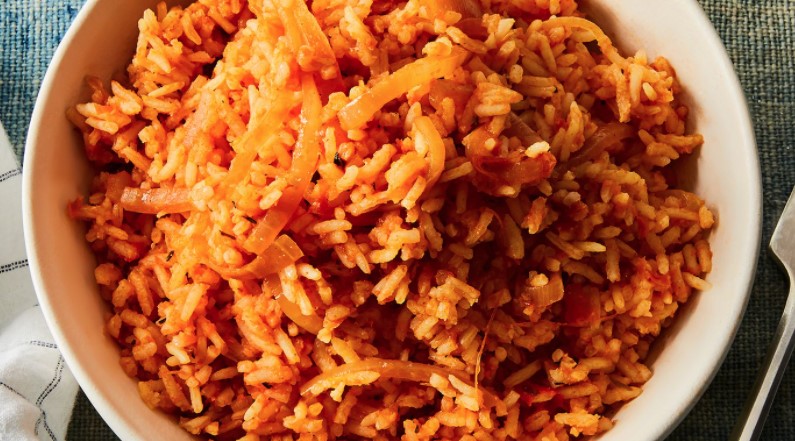 Maafe is a stew made with peanuts, tomatoes, onions, and other ingredients.

Tuwo masara is a cornmeal dish eaten in northern Nigeria.

Tuwo shinkafa is a thick rice pudding commonly eaten with miyan kuk soup, goat stew, or miyan taushe. Tuvo shinkafa is most common in the northern part of the country.

Moin-Moin / Moimoi is a traditional protein-rich Nigerian pudding steamed in banana leaves. The pudding is made from a mixture of black-eyed peas with onions and freshly ground pepper (usually a combination of bell pepper and chili or Scotch Bonnet).

Ekuru is a traditional food of the Nigerian Yoruba people living in southwestern Nigeria. This is another bean pudding similar to moin moin. Ekuru is also made with black-eyed peas, but no pepper is added. Served with roasted peppers.

Suya – meat with chili powder, peanut powder, and other local spices, grilled on skewers. It is one of the most famous Nigerian cuisine and can be found easily throughout the country.

Tsire is a meat generously topped with a mixture of ground peanuts and chili. Prepare with or without skewers.

Kilishi – Meat cut into very thin slices is dried, brushed on both sides with a paste of chili, spices and local herbs, and then quickly grilled.

Balangu – meat (beef, goat or lamb) cooked on coals without spices so as not to spoil the taste of the meat. Salt and spices can be added later to taste.

Ayamase is a stew made from green or red Scotch Bonet peppers.

Gbegiri is a bean stew typical of the people of southwestern Nigeria.

Ofada stew is a palm oil-based stew widely known in western Nigeria. It is made from palm oil with unripe peppers, tomatoes, beef and nere seeds.

Asaro, a thick yam porridge, is a popular Nigerian dish common in the western region. Asaro is made by boiling and lightly mashed yams in a tomato, chili, and chili sauce with palm or vegetable oil. It can be garnished with fish, meat, or crayfish as desired.

Ewa Agoyin / Ewa Aganyin is a popular street food in Nigeria and is commonly eaten in Lagos and other southern states of Nigeria. It is a soft bean puree. It is usually eaten with crushed pepper and a hot tomato sauce. The local name for the dish is “Ewa G”. Additional ingredients may include palm oil, onions, and crayfish. It is usually served with bread.

Ogi / Eko is a fermented grain pudding from Nigeria, usually made with corn, sorghum, or millet. Traditionally, the grains are crushed and soaked in water for fermentation for three days until they become sour. Then this mass is boiled until the consistency of a creamy pudding. Usually served with moin moin or akara.

Dodo is a garnish of ripe bananas fried in vegetable or palm oil.

Mosa – fermented corn, ground into a thick paste, toasted and dusted with sugar. There is also a variant of moza made from a very soft plantain, which is ground into a paste, mixed with dried black pepper, fried, and sprinkled with sugar.

Chin Chin – fried biscuits made from flour, eggs, and butter.

Kunu is a popular drink made from millet, sorghum, or corn in Nigeria.

Fura da nono is a popular drink, especially in northern Nigeria, made from boiled millet or sorghum, ground with a little cow’s milk.

Zobo is a drink made from rosella juice.

Soy milk is a drink made from soaked, crushed, and strained soybeans.

Palm wine is popular in African cuisines, including Nigeria, a palm tree sap drink that can be distilled in ogogoro.

Ogogoro is a strong alcoholic beverage made from the raffia palm tree. The alcohol content in ogogoro usually ranges between 30 and 60 degrees. Ogogoro has a large social component – it is an integral part of numerous religious and social ceremonies.

Burukutu is an alcoholic beverage made from sorghum and millet.

Fir Honey: Effect and Origin of The Special Honey

Weight Loss Tea: These Varieties Can Help You Lose Weight