The Jollof Wars : Nigerian or Ghanian Styles of Jollof?

Nigerian or Ghanian Styles of Jollof : Jollof is a rice dish popular among residents of many West African states. Nigeria, Mali, Ghana, Senegal, Sierra Leone, and Liberia all have their own versions of Jollof.

The name of the dish comes from the name of the Wolof people. In French-speaking regions, it is called riz au gras. A number of researchers consider Jolof to be the most famous African dish outside the mainland. Nigerians and Ghanaians argue about the origin of the Jolof: they both claim that it is their people who own the authorship of the dish. This issue is quite important and delicate for both peoples. The first origins of the dish are found in Senegal, whose territories in ancient times were part of the state of Wolof. Food and agricultural historian James McKenna agrees with this statement while pointing to the possibility of the spread of Jolof by traders of the Mali Empire who moved to the major centers and brought with them knowledge of blacksmithing and agriculture.

The dish usually consists of rice, tomatoes, tomato paste. Ingredients can include meat, fish, shellfish, and various vegetables: potatoes, cabbage. Due to the use of palm oil and tomato paste in the preparation, the color of Jolof is usually red. 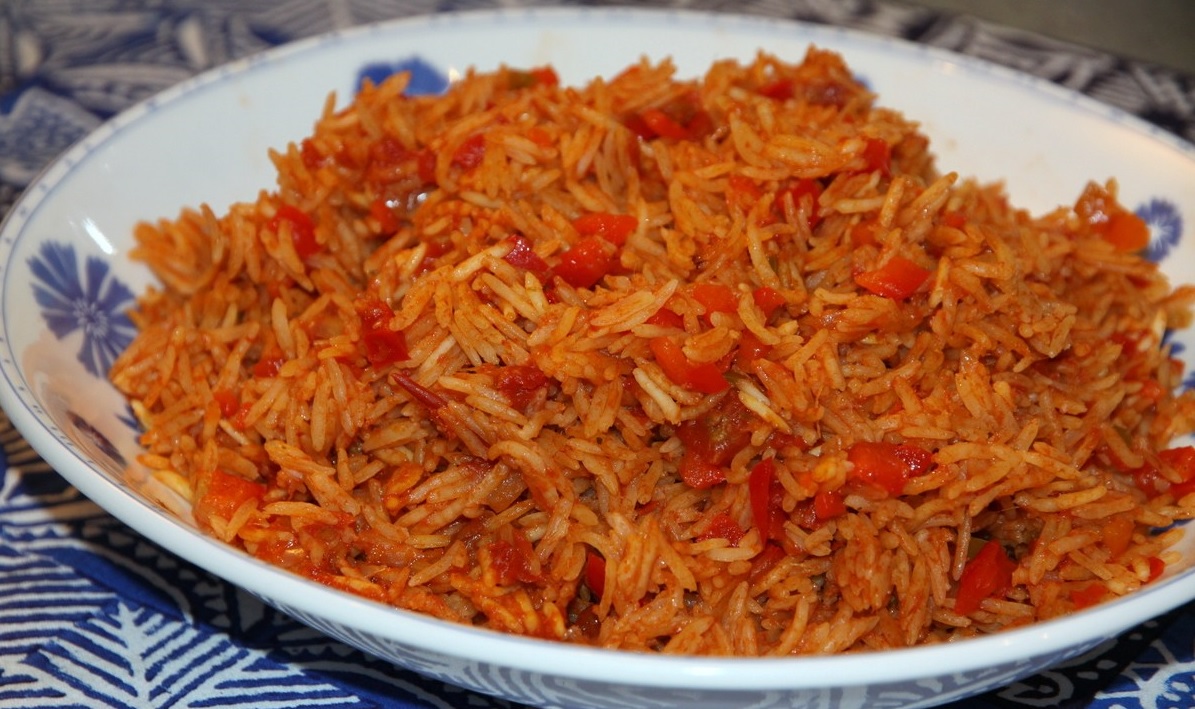 Jollof is common throughout West Africa and is something of a local pilaf or paella, as it is often prepared with chicken. It is believed that it was Jollof Rice that served as the basis for jambalaya – one of the most famous dishes of Cajun cuisine in the American South.

Sometimes the importance of something is easier to judge by when it is threatened. This is exactly what happened in 2016 with Jollof Rice due to the invasion of Tuta Absoluta moths in Nigeria. The malicious moth lays the larvae, they turn into voracious caterpillars that feed on tomato tops. Tomatoes are one of the staple foods in Nigeria due to the popular love of Nigerians for the local pilaf, which cannot be cooked without tomatoes. As a result, a state of emergency was declared in several provinces of the country, and newspapers called the invasion of moths “Tomato Ebola.”

Rinse the rice and fill it with water. Cut half the onion and the tomatoes into quarters, peel the peppers, and grind them together with the garlic and red hot peppers in a blender.

Finely chop the remaining onion and fry a little in a deep frying pan. Cut the chicken into small pieces, then send it to the onion, add a little salt and add curry and black pepper, mix and fry until tender.

We take out the finished chicken with a slotted spoon and pour our tomato mass into the same pan while reducing the heat to below average. We need to warm up the tomatoes, then pour out the oil and bring to a slight bubbling. Then add cumin, chicken, rice, and chicken broth, mix, cover, and leave for 30 minutes, stirring a couple of times. 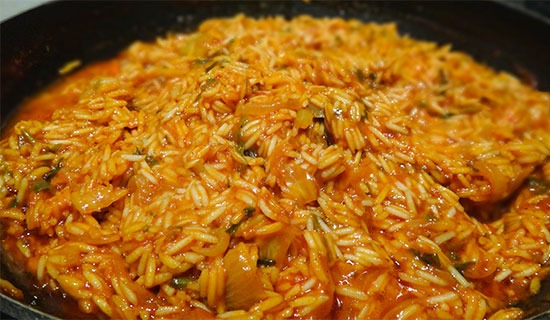 Let’s not talk about the clay houses with thatched roofs, standing for years under violent tropical rains … Tropical rains in Ghana are substantial, but not often, Europeans prefer not to try at all.

They like spicy food with lots of vegetable sauces with tomatoes, chili and bell peppers. All kinds of stew from crabs, chicken meat, offal. The assortment of rice is amazing – you can hardly imagine such an amount of rice. There is a lot of fish and seafood that are caught in front of you, on the ocean shore. For cooking, use palm oil and inexpensive vegetable oils. Kebabs, yams, cassava, fish, seafood, poultry, legumes, tomatoes, onions, fresh coconuts with tender pulp and juice, papaya, bananas, pineapples, breathtaking melon-sized mangoes, sour cream fruits that make incredible desserts … Africa!

Ghanaians are very sociable, they learn languages quickly. In addition to English, they understand Russian, German, French. Women are happy to cook European and Asian dishes and willingly teach the basics of their traditional cuisine.

For Jolof rice, you can choose chicken offal (can be cooked with poultry) and long-grain aromatic Basmati rice, which will be cooked in tomato sauce with chicken broth. If you like chicken giblets (feel free to use turkey giblets), be sure to cook this West African dish.

Bright red rice can be mixed with giblets, or stomachs and hearts can be put on top.

Heat the vegetable oil in a large frying pan, put the stomachs and hearts, season with white and black pepper, coriander. Fry until golden brown – 1-12 minutes, season with salt. Put in the oven, preheated to 160 degrees, while the rice is cooking. Shake the mold several times during cooking. After about 10 minutes, put a few small tomatoes or cherry tomatoes in the pan.

Wash Basmati rice, soak for 15-20 minutes in warm water with a couple of tablespoons of salt.

Fry finely chopped onion, garlic, chili in vegetable oil until transparent, stirring occasionally. Add parsley, chopped tomatoes, trade wind, tomato paste, pour in the broth. Bring to a boil and cook for 5-8 minutes. Season with salt. At this point, you can puree the sauce with a hand blender or food processor, but I love the texture.

Add the soaked rice, bring to a boil and reduce heat. We bring the rice to a state of readiness, but make sure that it remains intact, adding a little liquid as needed.

Mix the finished rice with offal, sprinkle with chopped parsley. Let’s not forget about whole tomatoes – they need to be mashed and mixed into the rice.

The Jollof  Wars -Nigerian or Ghanian Styles of Jollof

Jolof is a staple dish in many West African countries. As we pointed out above, this dish is based on stewed rice with onions, tomatoes, olive or vegetable oil, tomato puree, habanero peppers, stock cubes, ginger, garlic, curry, and thyme. Depending on the household, cooking methods, ingredients, and spices vary, with rice, tomatoes, and onions remaining the same. 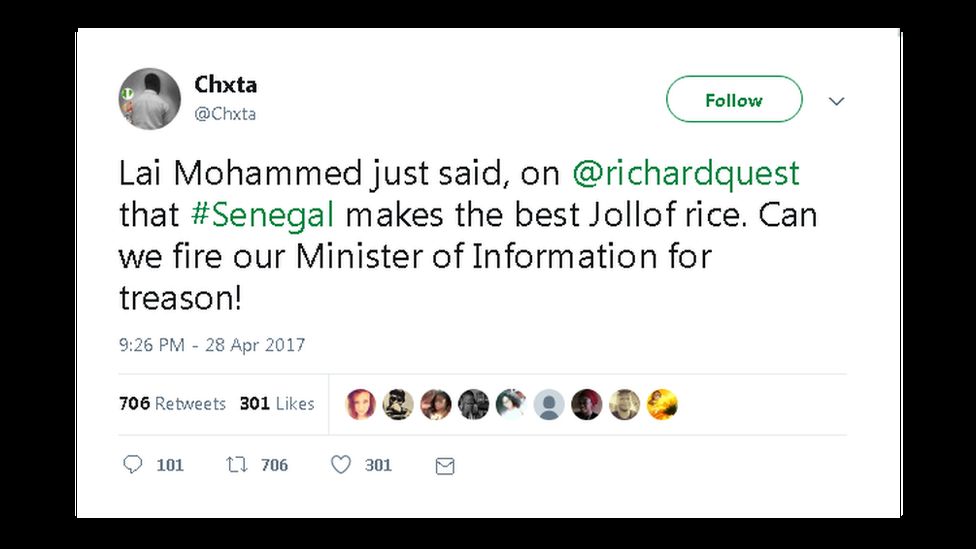 As a result of cooking this delicious dish, an intellectual, creative, and hyperbolized rivalry arose between Nigeria and Ghana, which manifests itself in a huge number of YouTube videos, memes on social networks. The point of these arguments, videos, and memes boils down to the fact that both sides are trying to show the superiority of their Jollof recipe in contrast.

The similarity of cultures, language, and traditions became the basis for fraternal friendship between these countries. But there is one problem – rice Jollof. This hilarious war between the Nigerian and Ghanaian diaspora emphasizes their national identity and demonstrates their ability to demonstrate the excellence of the dishes they can cook.

You need to understand that Africa is a huge continent, on which 54 countries are located, which have their own cultures and lifestyles. It is a hashtag like #JollofWars that allows Africans to assert themselves outside the continent.

In the meantime, while we argue about who has the best rice Jollof, this fun war and rivalry allows more and more to introduce people in the world to West African cuisine.

Which country makes the best Jollof rice? Nigeria or Ghana? 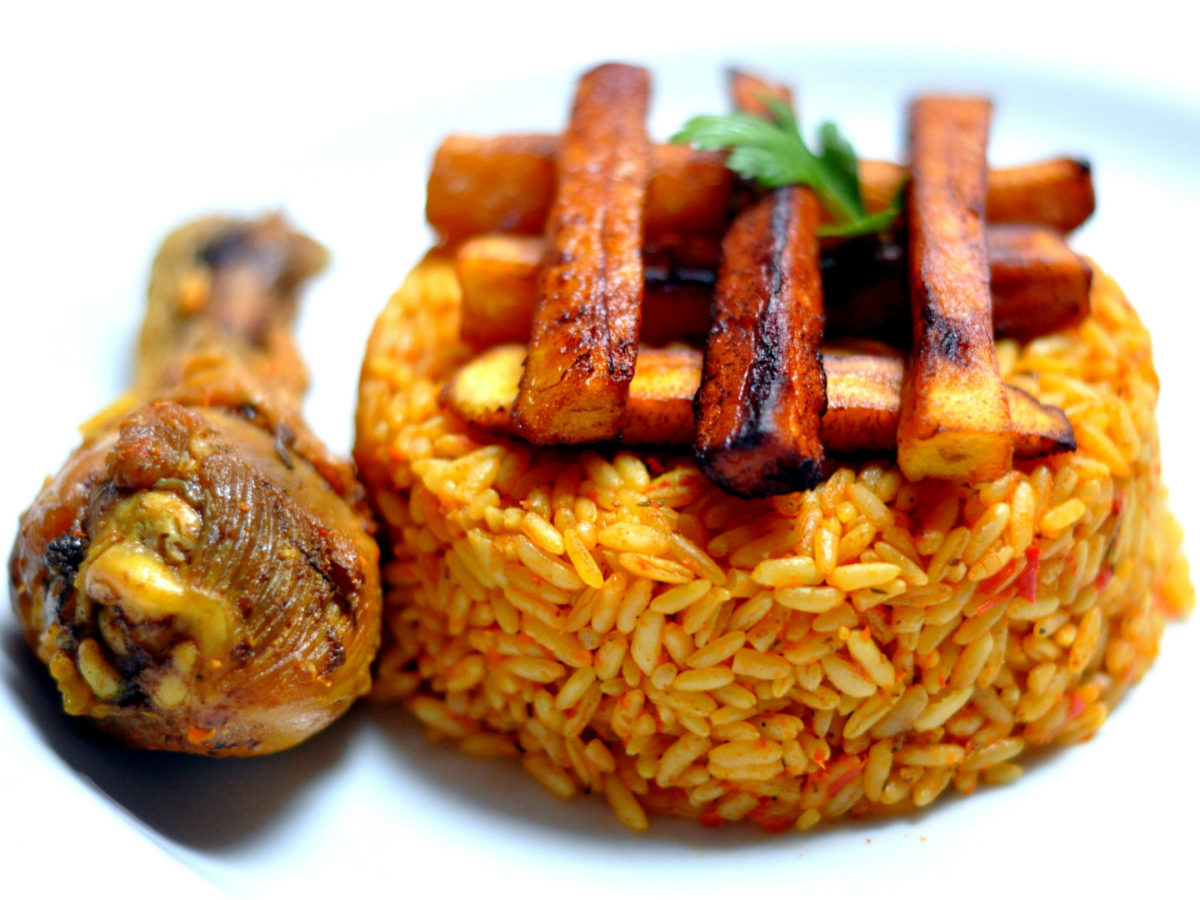 The huge variety of Jollof rice recipes is the basis of numerous debates and disputes between politicians, bloggers, celebrities, and ordinary people.

The vice president of Nigeria was forced to defend his minister of information, who did not unequivocally answer a journalist’s question about Jollof rice. The journalist asked the minister which country produces the best rice and the minister, not understanding the question, replied that this country is Senegal. It was here that some Nigerians caught the minister, calling him a traitor to Nigerian cuisine.

While in Nigeria, Mark Zuckerberg tried Jollof rice and did not compare it with rice from other countries in order to avoid an ambiguous reaction. Facebook creator praised Nigerian Jollof Rice with Shrimp. Well then! Now it’s all clear! Nigeria is not only a champion in soccer, but also its recipe for Jollof rice is the best. Don’t believe me? Ask Mark – he knows. He confessed this to me during our private discussion.

In July 2017, the Jollof Festival was held in Washington, DC, in which the winner was a contestant from Nigeria Atinuke Ogunsalu. She was awarded $1000 and given a job as a chef at a Jellof restaurant. Well .. This victory is a real argument against which it is difficult to argue.

Well, Nigeria! Great Job! Jollof. This is exactly the recipe that will help you out when you are tired of all your rice dishes.

Parents are  from Ukraine , born in Ghana and dating the most beautiful  Nigerian but without sense of bias voted Nigerian Jollof rice as the best to ‘date’ . I will be in Lagos on August 22 for the annual ritual of the World Jollof Rice Day and might PP on JRD . Do not say i told you.