Then how do they eat, you ask? The thing is that the role of ordinary plates is played by a large tortilla made of teff flour, which is called “injera”. In appearance, the cake resembles a large pancake, and to taste – sour bread. During the meal, the cake is placed on the table, and dishes are placed on top. What about forks, spoons? And in this case, “injera” comes to the aid of local residents. Small pieces of tortillas are broken off the edges and used to eat the served dish.

Ethiopia is a tropical country. Its location has a significant impact on the formation of local cuisine. Located in the northeastern part of the African continent, it is customary to eat rather spicy food here. If not all, then almost every dish in Ethiopian cuisine is served with a hot sauce. The most popular condiments that are included in almost all dishes are – onion, garlic, red pepper, cloves, mustard, ginger, coriander … 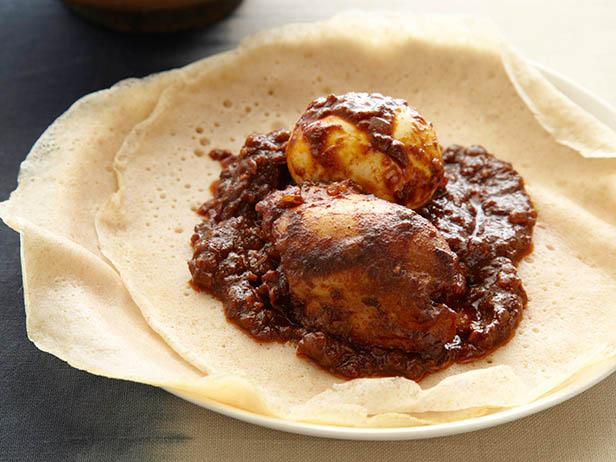 On the Ethiopian table, red pepper should always be present, in case of insufficient hotness and homemade cottage cheese, in case of eliminating excessive burning.

Capsicum, which is egg-shaped, is no less popular in Ethiopian cuisine. Capsicum seeds are used as seasoning in cooking and as a pain reliever for toothaches in medicine.

In the mountains of Ethiopia, there are many unique plants that can be used both in medicine and in cooking. One of these useful trees is “mariandera”. The leaves of this tree are used as sage, but you can even bake delicious bread from the seeds of “bananier de bru”.

Surprisingly, not all Europeans are ready to appreciate the local Ethiopian cuisine. Yes, unfortunately, it is.

For example, would you like to try butter barley porridge made with only rancid butter (i.e. spoiled with a bitter taste)? I doubt it. Okay, but what about pancakes made from yeast dough, but not those that we fry, but boiled pancakes.

Guests in Ethiopia are treated to a dish called African eggs. And it looks like this: a ham is put on a piece of toasted bread, and a soft-boiled egg is placed on top.

Do not say, Ethiopian cuisine, but the composition of meat dishes in Ethiopia is quite original. The Christians of the Ethiopian Church, like the Muslims, do not eat pork. The reason for this is the fasts provided for by the Orthodox Church. This led to the fact that Ethiopian cuisine is more like a vegetarian.

However, meat dishes are not completely excluded from the cuisine of this culture. Most often, exotic meats are used for cooking meat dishes. As a rule, this is the meat of snakes, lizards, crocodiles.

Ethiopian cuisine is also characterized by the use of camel meat. Local residents are sure that camel milk and the oil made from it have a number of tonic properties. Ethiopians often cook lamb or poultry. They consume breadfruit, which tastes like gingerbread.

On the tables of the richer part of the population, you can see an abundance of fresh fruits, jellies, and mousses. Spiders and locusts fried in palm oil stand out among the national dishes.

Another distinctive feature of Ethiopian cuisine is the almost complete absence of vegetable dishes. Instead, millet cereals are common there.

Fish is a popular product in some coastal areas. There are different ways to prepare it.

The most common modern dish is wat, which is stewed onions with boiled eggs and seasoned with spices. Sometimes beans or meat are added there.

In general, we can say that Ethiopian cuisine does not differ in particular benefits and tastes. Often, they cook there so that all the vegetables are overcooked, the meat is stewed, and the fish is overcooked. Moreover, in Ethiopia, they used to fry yesterday’s half-eaten food in oil and serve it as a new dish the next day.

Interestingly, in the Muslim regions of Ethiopia, the leaves of the narcotic khat bush are consumed, and special ceremonies are observed. 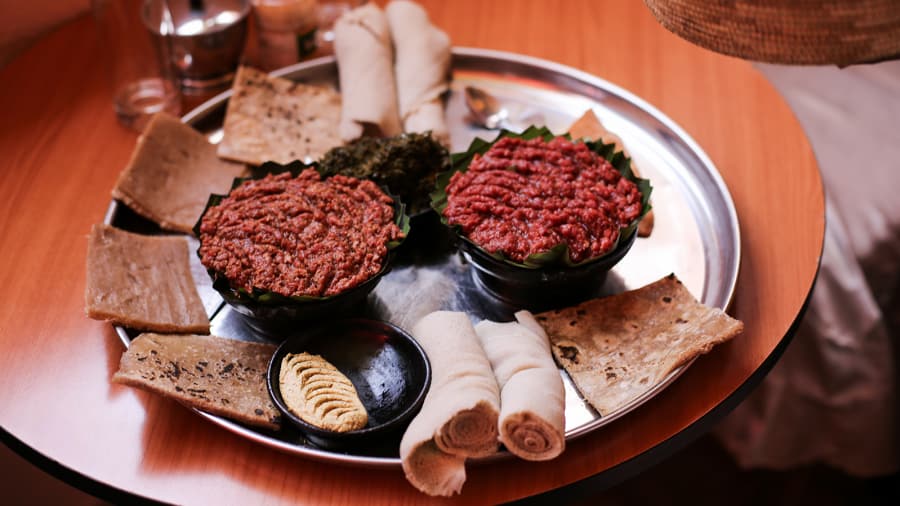 Indeed, Ethiopian cuisine and Ethiopian cuisine drinks are a wonderful exception to the general culinary culture. The most popular are such drinks as “zhalla” – beer made from barley; various honey drinks; local juice called “spris” – thick, multi-layered, which is made from fresh fruits: papaya, banana or avocado; moonshine with honey and herbs – “Taj”; and of course coffee.

The ritual of drinking coffee in Ethiopia can be equated with the tea-drinking ceremony in China. You can see and take part in such a ceremony in any restaurant or cafe in a given country. Incense smoking is one of the obligatory attributes of the ceremony. As a rule, coffee is added with sugar, herbs, and special oil. The best Ethiopian coffees are considered “Harar” and “Jimma”.

The process of brewing coffee looks like this in Ethiopian cuisine: coffee beans are laid on a metal sheet, which is laid on a roasting pan. On this sheet, the grains are washed three times and only then fried. Coffee is brewed in an earthen jug, where the ground coffee beans are poured with water, after which the jug is placed directly on the burning coals.

To check the thickness and readiness of the coffee, a fragrant brown liquid is poured into a glass and then splashed onto the jug itself so that it does not burst from the high temperature. It is known that on average, each Ethiopian drinks up to 10 cups of coffee daily.

This is such an original and peculiar cuisine of the tropical country of Ethiopia. If you go there on a trip, do not forget to share your impressions. 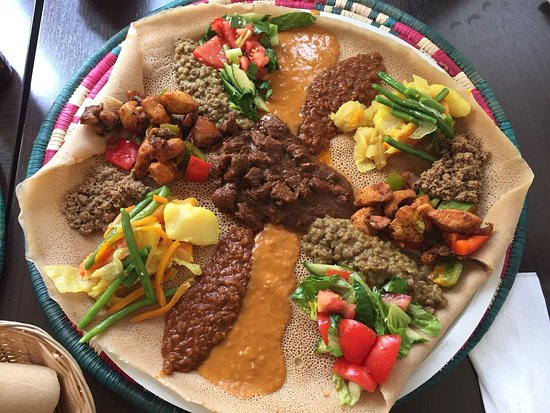 As already stated, everyone who tries Ethiopian cuisine reports an instant development of addiction and addiction. Painfully, it is delicious, fragrant! Especially those who love spicy food will definitely be satisfied. The fertile soil of the country for tens of centuries has allowed the cultivation of teff, maize, hot peppers, moringa – what creates a special character of the local cuisine. If you try to describe the cuisine of Ethiopia in a nutshell, then these are numerous cereals plus the sharpness of sauces. And if we characterize the local dishes in terms of appearance, then everything here comes down to just one word – “injera”.

The second, after injera, the key element of Ethiopian gastronomy is considered berbere – a mixture of hot chili peppers, fried onions, and a small amount of some kind of spices, well, just magical, otherwise – why do not local chefs reveal the full recipe for berbere and other dishes? Berbere is used not only in main dishes but also in sweet desserts. A thick consistency, dark cherry color, and simply incredible aroma are the key features of Berbere, which will allow you to always recognize Ethiopian food in the future, wherever you are. 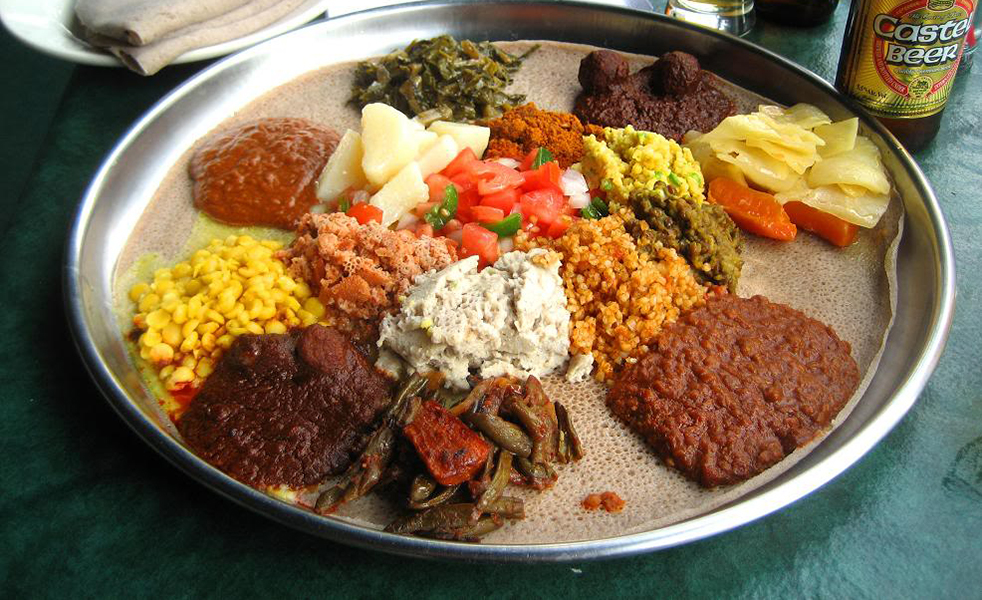 Moving on to the meat. Ethiopians eat meat, but not always. The fact is that the local confession – Ethiopian Christianity – relies on Old Testament prohibitions and permits. According to the denomination of the Ethiopian Christians, it is necessary to keep several major fasts every year, plus fast on Wednesdays and Fridays. These days, it is customary to eat exclusively vegetarian dishes, which, by the way, are abundant in Ethiopia’s cookbook. The locals do not eat pork either – both Christians living according to the canons of the Old Testament and Muslims. But they love and know how to cook beef, goat meat, lamb, and poultry.

And now a little about specific names that will help you navigate and make the right choice when you find yourself in front of an open restaurant menu. Tibs – the so-called elongated pieces of meat, usually beef or lamb, fried and served with spicy gravy. Doro-wot will appeal to poultry lovers, it is chicken cooked in onion sauce. Kitfo is one of the more popular dishes, which is fried pickled ground beef with hot peppers and niter kibbeh (ghee with spices and herbs). Kitfo is also prepared with cheese and herbs. Kitfo, like many other things, is served with injera cakes. 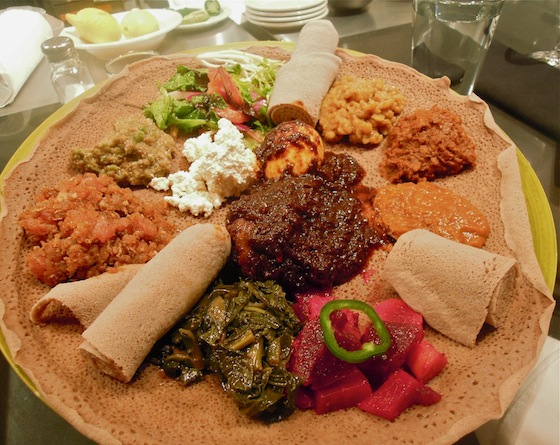 Everyone, of course, knows about Ethiopian coffee. In general, the word “coffee” comes from the name of the province of Ethiopia, Kaffa. It is in Ethiopia that some of the best Arabica varieties grow. And even if today the country is not the first in the supply of coffee beans, it is still worth paying tribute to the taste of this drink. It is impossible to imagine a friendly meeting of Ethiopians, which would take place, not over a cup of a fragrant drink. And any delicious meal or reception always ends with a serving of coffee. For alcohol, we recommend paying attention to honey wine and beer from local breweries.

Ethiopia also has its own amazing feast traditions. As we already said, instead of forks and spoons, pieces of a flat cake are used here. However, no one will express contempt in your address if you take food with your hands. On the contrary! So you will eat exactly like an Ethiopian. Perhaps at first, it will seem absurd, but you will get used to it very quickly, and then wonder why spoons are needed at all, when it is so convenient and, most importantly, delicious to eat with your hands? Ethiopians also hate to eat alone, so here in catering establishments, it is in the order of things to invite a lonely person to join at the next table.