Ancient Russian cuisine, until about the XIV century, was based more on customs than on culinary art. It was simple and not varied. In the peasant diet, such a technique as frying is almost never used. Food was cooked in a Russian oven, widely used: cooking, languishing, and stewing. For blanks for future use, salting, fermentation, and urination were widely used. Since ancient times, the table has been very clearly divided into lean and modest. The abundance of vegetable, berry, and mushroom dishes in Russian cuisine is due precisely to the fasting for many days. On the one hand, such a strict division led to a simplification of the menu, but on the other, to the creation of many original dishes that have become the hallmark of Russian cuisine and have no analogs in any foreign cuisine. For example, sauerkraut, pickles, dried mushrooms. Again, during fasting, a lot of forbidden milk accumulated in the house. To prevent it from disappearing, they made cottage cheese, but not ordinary, it was squeezed tight and several times, pressed, then simmered in the oven until it became completely dry. But after such processing, the cottage cheese was stored for many months. From the same series – ghee, which retains its freshness and taste for a long time after a truly unique technology and processing. 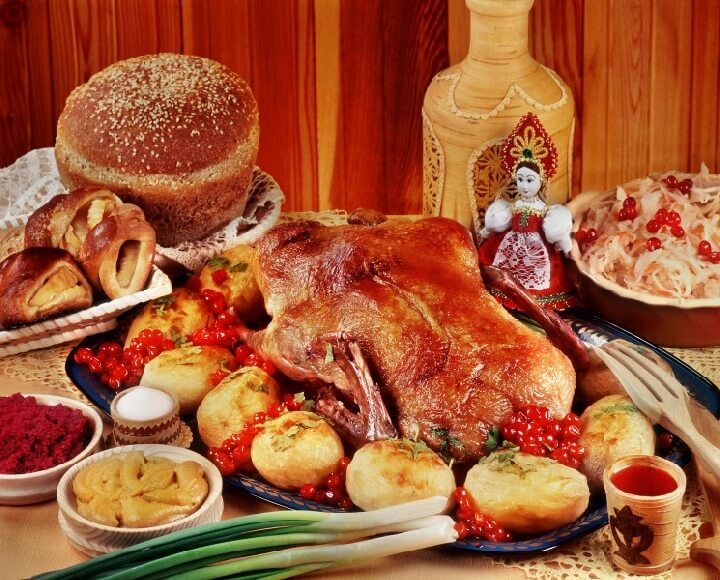 The peculiarities of the national cuisine have been better preserved than, for example, the typical features of clothing or housing. Traditional Russian dishes are high in energy and contain a lot of fat. This is due to the harsh climate: it was always necessary to eat a lot. The dishes in Russian cuisine are simple, rational, and practical. People prepared main dishes from bread, flour, and everything that the forest gave – honey, berries, nuts, mushrooms (although the population of the southern part of Russia is wary of mushrooms, afraid to use them). The main part of the Russians’ food was various types of cereals and dairy products. The meat was considered a festive dish.
The Russians learned to preserve and preserve food – they smoked, dried, salted meat, fermented vegetables, and fruits, pickled, salted (cucumbers, garlic, grape leaves, wild garlic greens), made jams, dried fruits (prunes, dried apricots, raisins).

When there was not enough flour or cereals, people ate “second bread” – potatoes. They also often ate cabbage, from which soups are made, for example, cabbage soup (“cabbage soup and porridge – our food”), as well as carrots, beets, and buckwheat (buckwheat porridge).

Bread played and plays the most important role in everyday and festive food. Russians say: “bread is the head of everything”.
Russians revered bread very much: according to the old custom, dropped bread must be picked up, wiped off, kissed, and asked for forgiveness for negligence. People have never thrown away bread crumbs. From childhood, the child was taught to respect this product. The guests were greeted with the words “bread and salt”.
Bread is used for snacking food throughout the day (for soup, for the second course).
Russian rye bread is baked with various additives (spices, raisins – the most famous aromatic bread “Borodinsky” with coriander).
White bread or lavash is also sold (white bread from the south or from Central Asia in the form of a large flat cake).

Russian cuisine is especially famous for the abundance of various snacks. These are salads, pickles (vegetables, mushrooms, fish), pies with different fillings (meat, fish, cabbage, potatoes, rice and eggs, apples, lemon, different types of jams), pancakes with different fillings (products made from batter, poured into a hot frying pan in a thin layer), smoked meat, fish, sausage, ham, caviar – black from sturgeon, which is appreciated more than red from salmon. 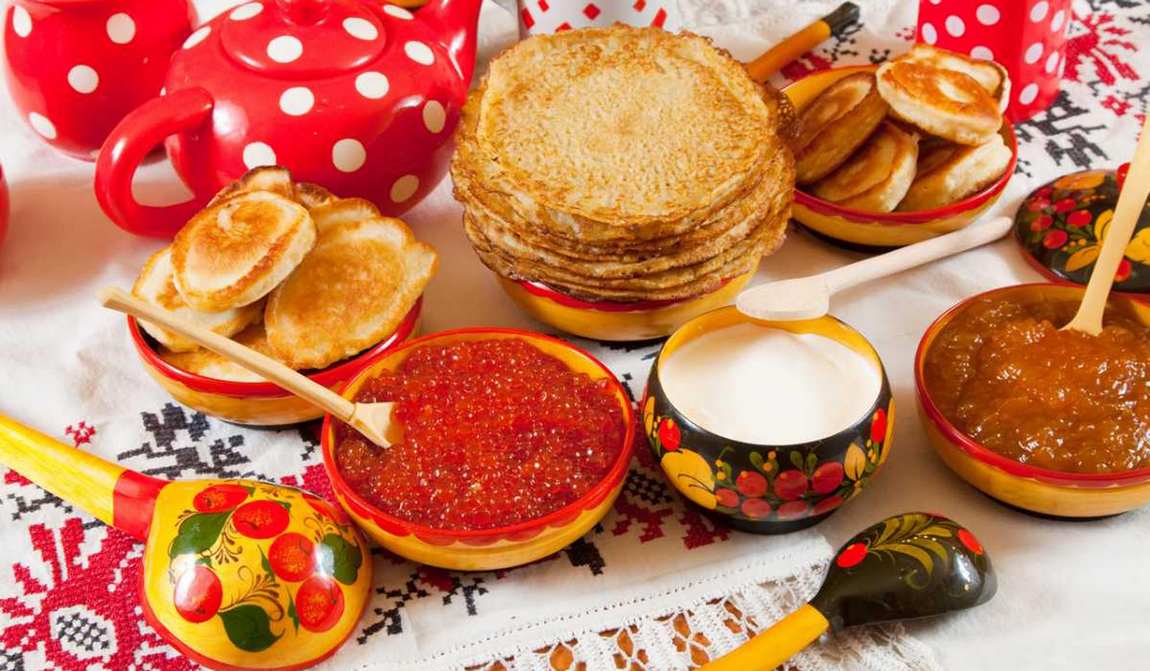 Russian soups are hearty and thick, or, as the Russians say, “dense”. They are cooked in water or kvass; sour cream or mayonnaise is often added to a bowl of soup. Be sure to eat bread with the soup.

Over the centuries, Russian cuisine has been enriched with many dishes from neighboring peoples.

The traditional Russian drink is kvass – a dark, slightly alcoholic drink made from bread or honey.

Vodka is considered one of the symbols of Russia, although in recent years the amount of vodka consumption is inferior to the amount of beer consumption.
There are world-famous brands of Russian vodka: “Stolichnaya”, “Smirnovskaya”, there is also an old tradition of home-made vodka, the so-called moonshine.
Vodka is affordable both in price and because you can buy it everywhere if you want, and this is one of the reasons for alcoholism among Russians. Cases of poisoning with vodka or moonshine are not uncommon.
Vodka and beer should be eaten. There is an endless selection of different products. Dried squid, smelt (small dried fish), roach (dried fish that must be broken and eaten like chips), chips, peanuts, pistachios, croutons (small dried pieces of bread with different flavors) are sold with beer. Vodka should be eaten with bread, sausage, pickles, wild garlic, etc.

In the past, Russians usually ended the day with the rite of tea drinking, exchanged news at tea, talked about the events of the day, and the whole family gathered for tea.
Tea is brewed in a special teapot, allowed to settle, and then the tea leaves are poured into cups and topped up with boiling water, or tea is prepared in a samovar. Tea is served with sweets: jam (cherry jam is most appreciated), sweets, cakes, buns, biscuits.

Samovar
Samovar is a self-heating device for making tea. The samovar consists of a vase (there is a charcoal brazier with a pipe), handles, a teapot burner, a spout with a key.
In the past, in every home, the samovar occupied an important place in the interior of the living room or dining room. During tea drinking it was placed on the table or on a special table, the tea was poured out by the hostess or the eldest daughter. Gradually, samovars began to resemble not teapots, but decorative vases, became simpler and stricter, and finally became electric. In modern times in Russia, the samovar has ceased to be a basic necessity. 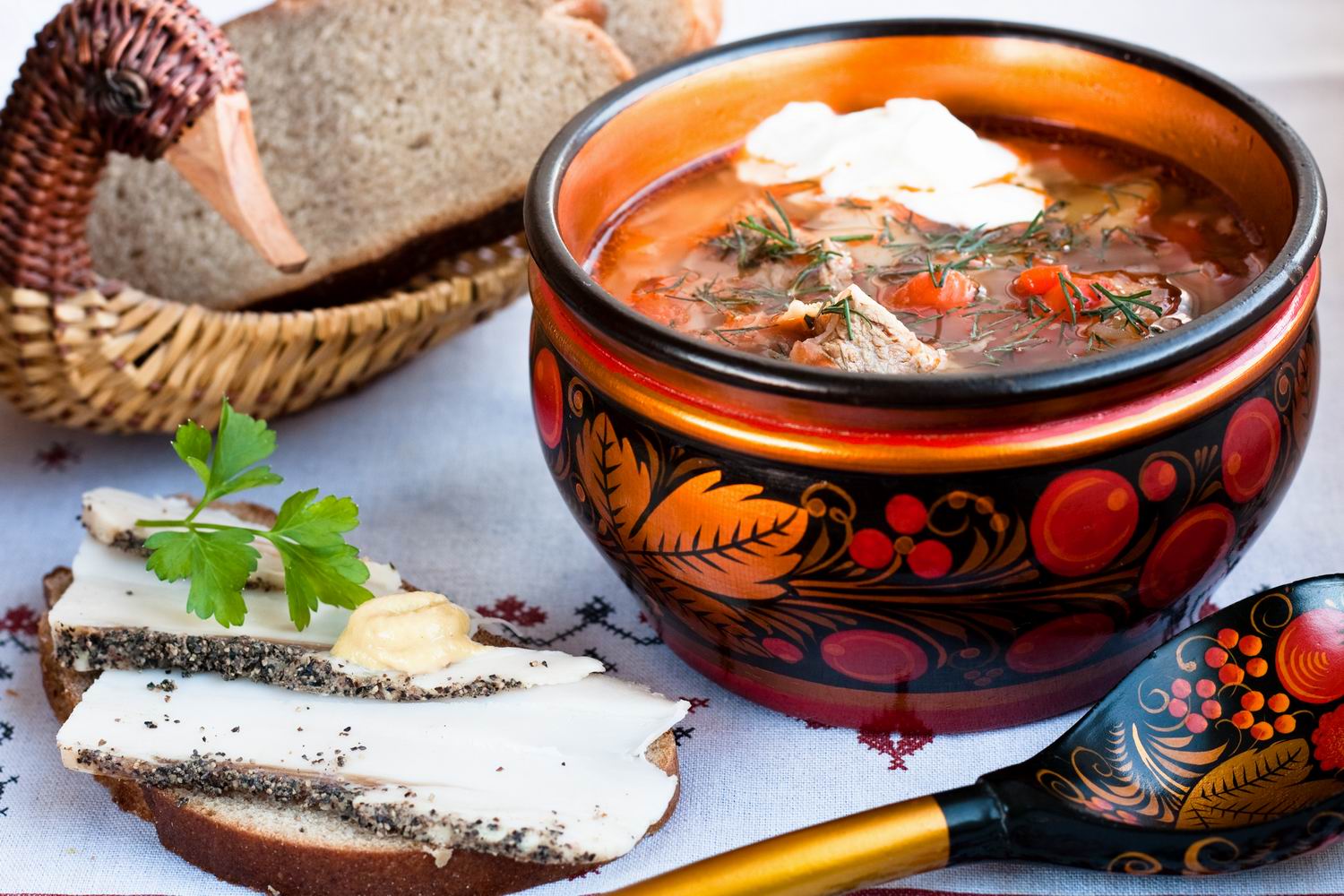 There is a big difference between everyday and holiday food, between the dishes offered in restaurants

Lunch
Lunch usually consists of the first – soup, and the second – hot (meat or fish with a side dish). Russians are accustomed to eating during the working day in fast foods (there are establishments of this type offering Russian national dishes), in canteens and cafes. Unlike a rich Russian home meal, a foreigner may be surprised by the small portions in Russian restaurants. There are quite comfortable restaurants at the highest level, but a normal Russian cannot afford to have lunch or dinner there.
On the street, you can always buy something to eat – pies, pastries, pancakes, shawarma (kebab), fried potatoes with different fillings.

Dinner
Dinner does not play a very important role in the diet. Usually, they eat what was for lunch, or what is found at home.

Home festive feast
In Russia, family holidays are usually celebrated at home, guests are also invited home and treated themselves. There is no custom to hold meetings in restaurants.
Russia has a tradition of a rich feast. For a long time, it has been so established that the guest must be received as best as possible and fed to the fullest.
The change of dishes (appetizers, the first is soup, the second is hot, the third is sweet) in the Russian feast is not very clear – as a rule, all sorts of snacks, pies, salads, meat dishes, and even desserts are on the table at the same time. At the same time, Russians attach great importance to the abundance on the table – there should always be a lot of food of all kinds and different (despite possible material difficulties).